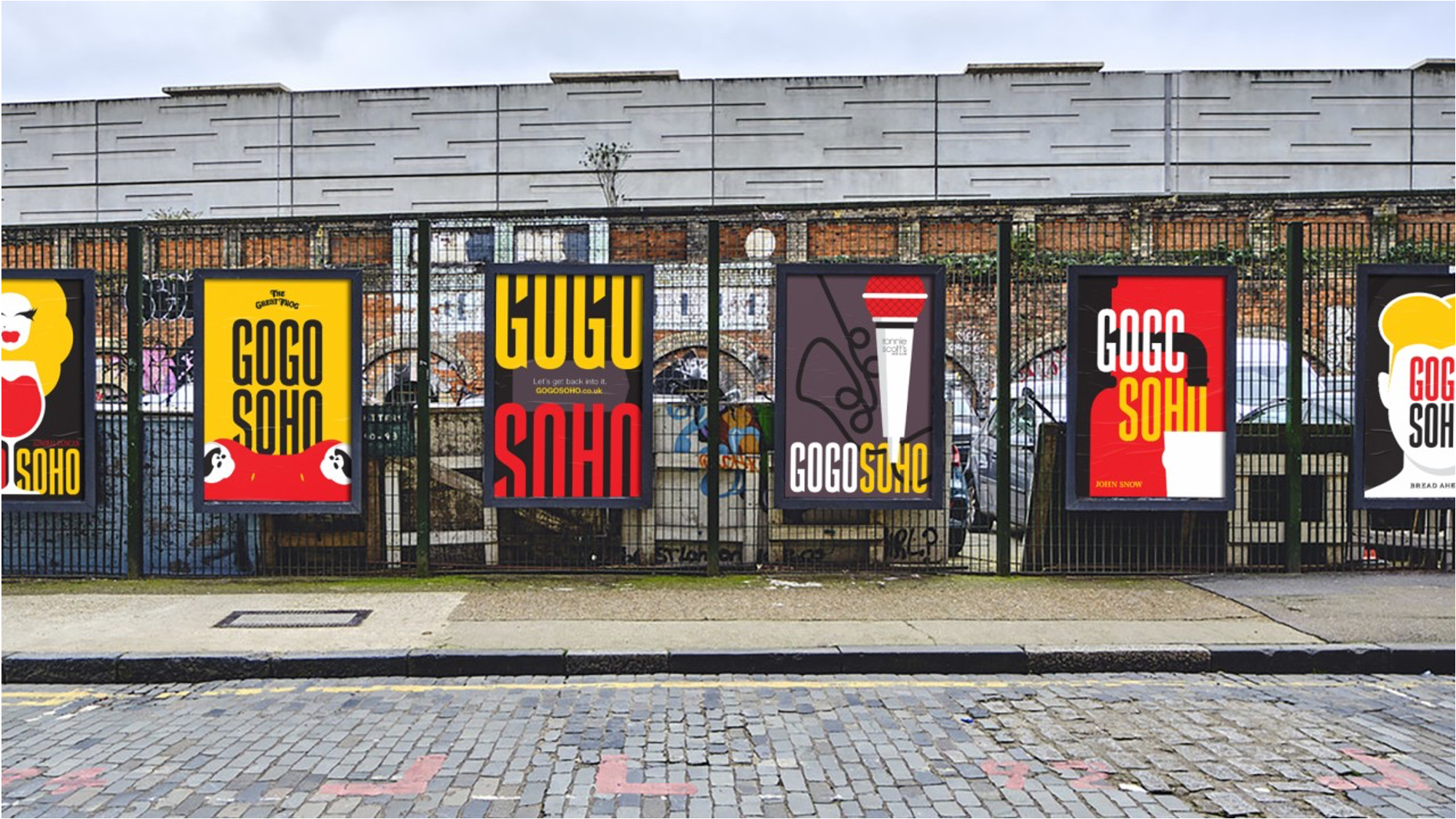 Supported by the Mayor of London’s office, Westminster Council and The Soho Society, we unveiled 'GOGOSOHO', an energetic new pro-bono campaign celebrating the small independent businesses of our Soho home, following a challenging period for retail and hospitality.

As a business founded and headquartered in Soho, M&C Saatchi Group wanted to do something positive to protect and promote the businesses that give its location in the centre of London its unique charm, character, and colour.

'GOGOSOHO' brings together more than 20 local businesses, including Ronnie Scott’s, John Snow, Bar Italia, Soho’s Original Adult Store and Duck Soup, under one creative umbrella and encourages those based in Soho to revisit some of their favourite places whilst also inviting people in other parts of London to head back to the centre of town.

The Mayor of London, Sadiq Khan, said: “Soho is at the heart of our city with its lively atmosphere, vibrant community and outstanding entertainment. The past 15 months have been incredibly hard for the area, but GOGOSOHO is a great way to celebrate these vital local businesses and draw visitors back to one of our most famous locations. Alongside my Let’s Do London domestic tourism campaign, we will continue to encourage Londoners and visitors to make the most of our city’s world-leading hospitality, culture, nightlife and retail venues.”

Ben Golik, chief creative officer, M&C Saatchi, said: “Soho’s been hit hard this past year. It’s been our home for 25 years and if there’s ever been a time to give back – it’s now. GOGOSOHO is a proud shout out to our neighbours, and a rousing call to get Londoners back in to support them. From vintage vinyl to vibrators, Soho’s always been home to unique indie retailers. We’d like to keep it that way.”

Andy Harris, head of design, M&C Saatchi, and creator of the campaign’s bold illustrations, added: “We’re passionate about getting Londoners back to support the businesses we’d hate to lose. Every illustration is as unique as the shops we’re showcasing – the campaign style is as bold and quirky as the people and places we love.”

The campaign’s styling hangs on a simple wordmark created using ‘FS Marlborough’, a font designed in a collaboration with Fontsmith. Based on an original street sign in Great Marlborough Street, FS Marlborough’s unique forms and deep roots in Soho made it the perfect cornerstone for the new brand.

Along with the GOGOSOHO wordmark, a bold and vibrant colour palette forms the central pillar of the look and feel. The combination of black, red and yellow evokes a sense of the street life and nightlife that Soho is synonymous with.

With a subtle quirk or dual meaning in each illustration, the executions highlight the individuality of each business featured, referencing their histories and individual personalities. On one, skull rings form the eyes of a frog to showcase The Great Frog’s signature jewellery. On another, an angry cockerel with a boxing glove for its wattle sums up restaurant Coqfighter. And in a nod to Soho history, the Broad Street water pump that John Snow linked to a cholera outbreak is shown pouring a pint for the pub named after him.

We have also created a suite of fly posters which will appear in a number of London locations, including Mare Street, Brick Lane, Clere Street, Dalston Lane and Sclater Street. The poster campaign is supported by a GOGOSOHO.co.uk microsite which hosts film content showcasing Soho’s independent businesses.

To amplify the push, we have developed social media, influencer activity and performance media, geotargeting visitors to central London to encourage them to pop into Soho, as well as creating a bot to hijack hashtagged conversations about Soho on social channels, directing people to the campaign and its participating businesses.

There is also six hand-painted GOGOSOHO-branded 'Open' signs. Evoking the styles of Soho street signage, from sex shops to tattoo parlours, the signs will sit in the windows and doors of local Soho businesses, welcoming in customers.